This exercise contains a factsheet about totalitarianism that explains why the Nazis saw it as an important means of controlling the German state. By the end of this activity you will have gained a greater understanding of the importance of protecting and upholding democratic values and human rights and understand the nature of propaganda throughout time and place. In addition, you will have reflected on how subtle changes in society and choices of individuals, organisations and governments can lead to horrific consequences.

Read the factsheet and discuss the questions presented below.

The Basics of Totalitarianism

One of the main goals of the Nazis was the establishment of the Volksgemeinschaft (people’s community) based on the principle of the common good of the community, rather than the good of the individual. Within this term the Nazis emphasized the purity and superiority of the so-called Aryan as the master race. In their minds, this master race had a “natural right” to rule over “the others”, the so-called sub-races, and a specifically vile hatred for Jews and anything un-German.

Of similar fundamental importance to Nazi ideology was the matter of unifying all Germanic people under one single nation and therefore focusing on the acquisition of Lebensraum (living space). This would be achieved through growth and expansion by means of threats and violence and, if necessary, through war. To achieve this, The Nazis needed the total subordination and support of the people and they thus saw it necessary to implement a policy of Gleichschaltung: the process of consolidating the views of individuals and institutions into one view through what is today defined as totalitarian measures. To grasp what happened in the German state under Nazi rule one thus needs to understand the basics of totalitarianism.

Totalitarianism is a form of government that monopolizes and asserts total control over public and private lives of its citizens. A totalitarian state has no qualms about the cost of lives or human rights as long as all resources are directed towards the single unifying purpose, which is the state represented by a strong central rule. This rule is usually represented in the form of a leader as a charismatic cult figure. In Nazi Germany this was called the Führerprinzip and referred to Hitler as the one supreme leader, who expected total obedience.

This monopolization of power is made possible by strict governmental control of all aspects of society and individual life. The totalitarian leadership does not permit individual freedom and traditional organisations and social institutions are discouraged and suppressed. Due to this the state controls all aspects of youth, cultural, religious, professional and sports groups through its political control and the reach of the government is limitless in all daily matters. In this way, one could say that totalitarian regimes also differ from the older forms of authoritarian regimes where the main goal was usually limited to striving after political control alone. 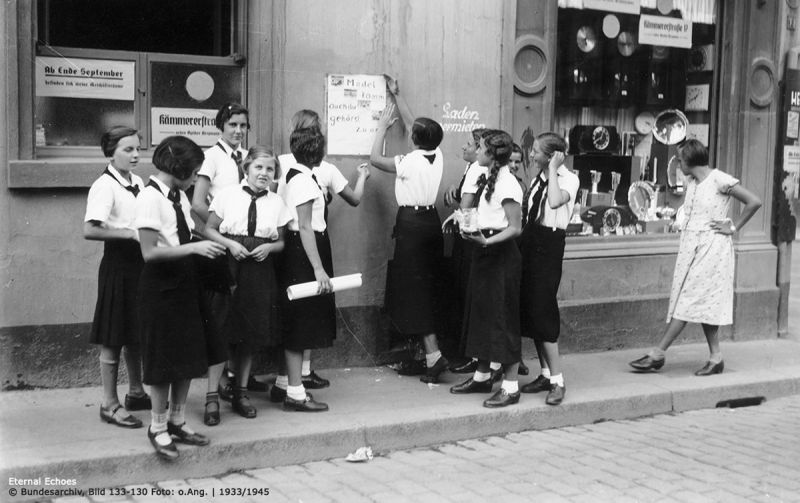 Members of the Jungmädelbund attaching an advertisement poster for the Bund Deutscher Mädel (BDM) on a wall with the inscription “Girl come, you’re one of us”. To control all youth, Nazi Germany wanted all boys and girls to join their youth movements, in which they were taught the basics of the Nazi worldview.

In August 1933, the Reich Minister of Public Enlightenment and Propaganda, Joseph Goebbels, spoke at a radio exhibition about the direction of German radio. In this speech, one can clearly see the importance of these totalitarian measures to consolidate the masses towards the needs of Nazi ideology:

"A government that has determined to bring a nation together so that it is once more a centre of power in the scales of great world events has not only the right, but the duty, to subordinate all aspects of the nation to its goals, or at least ensure that they are supportive. That is also true for the radio. The more significant something is in influencing the will of the broad masses, the greater its responsibility to the future of the nation."

A common trait in totalitarian states is also the pursuit and exclusion of all those who might not agree with the implemented view of the movement and thus become enemies of the state. By using propaganda and explaining everything as a means to protect and strengthen the nation and its people, the totalitarian regime then sees it as mandatory to take severe action against what they consider "evil" and a threat to the state. This didn't just apply to political opponents but even those that the Nazi government deemed unworthy and un-German due to race or social behaviour.

To make sure that most of the public opinion also shares this view, the totalitarian regime goes to great length to dictate and synchronize proper morality through areas of education, science and culture and will censor or erase any opposing views. By controlling and censoring the public opinions through totalitarian means, the Nazis thus could create the impression that they had overwhelming public support for the regime, so that those seemingly few with doubts wouldn’t dare to express them in public. 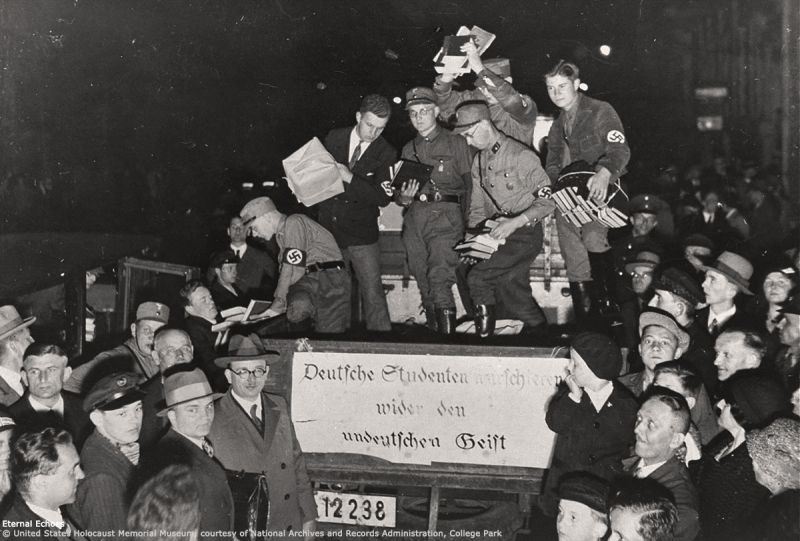 Students and members of the SA unload books deemed "un-German" during the book burning in Berlin. The banner reads: "German students march against the un-German spirit." Berlin, Germany, May 10, 1933.

1 Jewish Life in Europe Before WWII