This exercise contains a factsheet and images featuring antisemitic prejudices and some of the most common myths and accusations that were used in Nazi propaganda against the Jews. By the end of this activity you will have gained knowledge about antisemitism and racism then and now, and you will have developed your understanding of the consequences of stereotypes and prejudices.

Read the fact sheet and do the tasks that follow.

Antisemitism is a term used to describe prejudices and hostility towards Jews simply because they are Jews. Various manifestations of antisemitism have been present throughout history. Starting with anti-Jewish ideas within Christianity, antisemitism in the modern era developed into political, nationalist and racist forms.

The Holocaust was a genocide: the Nazis wanted to have "a world without Jews" and they set out to murder as many Jews as possible simply because they were Jews.

In the list below you can read about some of the most common antisemitic myths and accusations against Jews.

This myth centers around the accusation that all Jews across all ages were collectively guilty for the crucifixion of Jesus Christ. This was already present in early Christianity, and was an important factor in the persecution and discrimination of Jews in Europe for close to 2 000 years.

This myth appeared in Europe during the 1100s but has persisted into modern times. It builds on the false allegation that, during the Jewish holiday of Passover (Pesach), Jews would kidnap and murder non-Jewish children in order to use their blood in the baking of unleavened bread.

Obsession with Money, Greed and Usury

Old myths portraying Jews as stingy or tight-fisted, greedy and wealthy are still commonplace today. These were reinforced during the Middle Ages when Jews were forbidden from working in many trades and were therefore forced to earn a living through trade, moneylending and tax-collecting. Although even Christians worked in these fields, they weren’t subjected to the same hostile prejudices.

During the 1800s and 1900s, Jews were often portrayed as an "alien race" and a threat against the nation and its people. Jews in antisemitic propaganda were characterized with crooked noses, fat lips and claw-like hands in order to mark them out as different, inferior, inhuman, animal-like and dangerous.

Central to antisemitic thinking are fantasies about Jewish plots and Jewish power over national or even global politics, economics, media and culture. The myth of a Jewish conspiracy can be traced to the Middle Ages, when Jews were variously blamed for spreading the Plague. But these ideas became even more common during the 1800s when Jews in a number of countries were afforded increased rights. Myths began to circulate that there had to be a Jewish conspiracy behind it. Then, just as today,  successful or influential Jewish individuals were used in antisemitic propaganda as "evidence" that all Jews are powerful, conspiratorial and dangerous.

Look at the Nazi illustration from "The Toadstool" (Der Giftpilz), a German children’s book from 1938. Deconstruct the image by answering the questions. 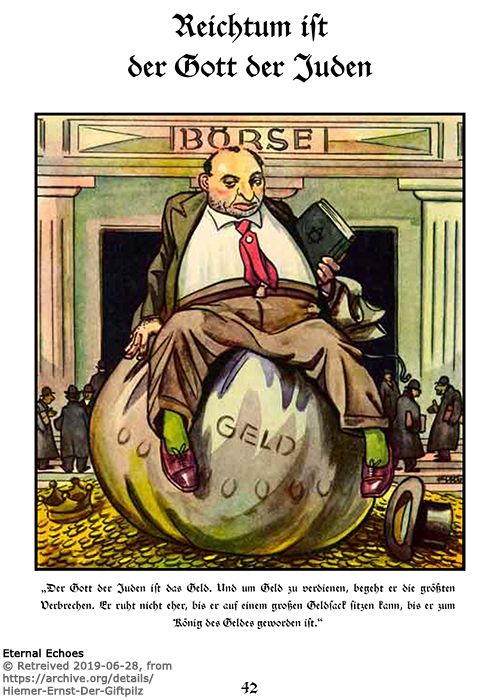 In 2019, during the Carnival parade in Aalst, a small city northwest of Brussels, Belgium, one float in the parade set off an uproar. It featured two giant figures of Orthodox Jews, with side curls and grotesquely large noses, sitting on bags of money. 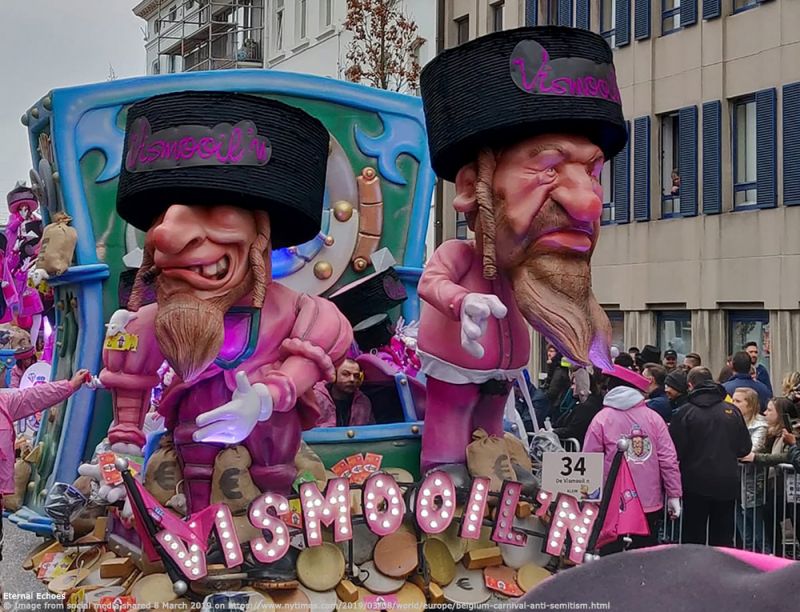 3.1 The Nazis Come to Power