This exercise contains a factsheet and testimonies about the establishment of ghettos and the living conditions inside them. By the end of this activity you will have developed your ability to reflect on the relevance of historical events in our lives and on the necessity to protect and uphold democratic values and human rights. You will also have developed your understanding of local history through the testimonies of the people who witnessed these places.

Read the text and do the exercises that follow.

The Establishment of Ghettos

The term “ghetto” has its origin in the name of the Jewish quarter in Venice, Italy. Established in 1516, the city’s Jews had to live within this specific part of the city.

Almost immediately after the German invasion of Poland in September 1939, the Germans started creating so-called ghettos, designated areas where Jews were forced to live, segregated from the rest of the population. In cities, these areas were often established in neighbourhoods with poor living conditions or where many Jews already lived. Non-Jews living there were forced to move out.

During the Second World War, ghettos were mainly created in occupied Polish territories, but they could also be found in the Baltic states, Belarus, Ukraine, the Czech Republic and Hungary. The largest ghetto was created in Warsaw, where over 400 000 people were confined in an area not larger than 3.4 square kilometers.

In many ghettos the population was restricted to a life behind walls, fences and barbed wire, but there were also some “open ghettos” without walls.

Nonetheless, it was strictly forbidden for Jews to venture beyond the borders of the ghetto. Those who tried to go into hiding were dependent on help to survive. 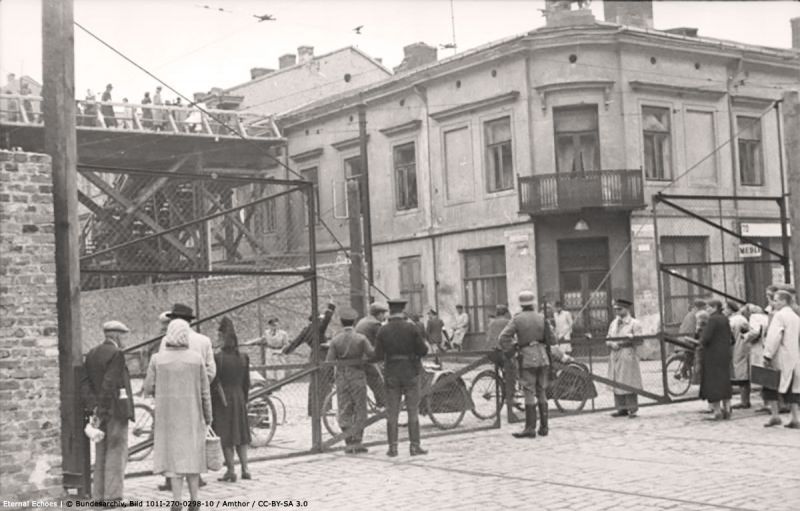 The Germans assigned the internal management of the ghettos to the so-called Judenräte, councils of Jewish elders which they appointed. 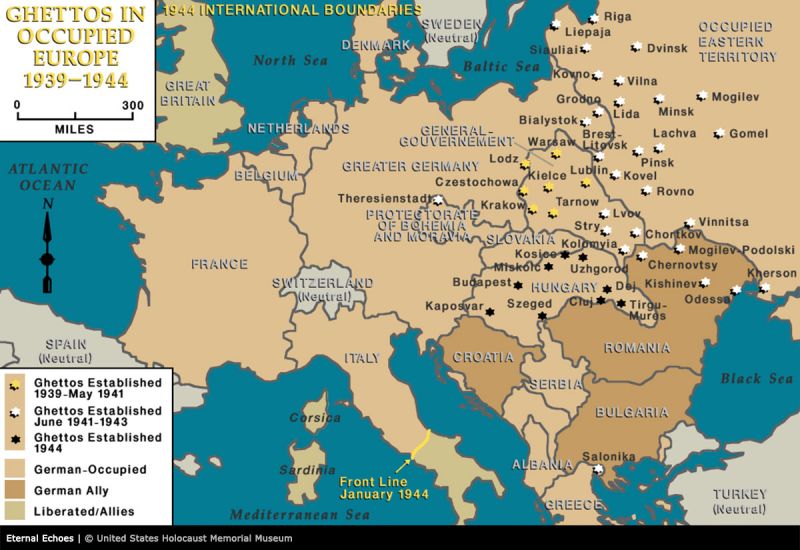 Hundreds of transports were sent from Germany and the rest of Western Europe to ghettos far away from Germany, for instance to Riga, Latvia and Minsk, Belarus. A number of people were taken and exploited as slave labour.

The ghettos were a provisional measure to control and segregate Jews. Eventually, once the Germans had developed a plan for the “Final Solution of the Jewish Question”, the ghettos were liquidated and those considered unfit for slave labour were killed in mass shootings or deported to extermination camps.

Conditions in the Ghettos

Jews in ghettos lived in isolation and in extremely harsh conditions; people starved, there was a lack of water, sanitary conditions were dire, cold or heat was a constant issue and infectious diseases spread easily. Due to these conditions, many died of famine, from illnesses, or were killed.

Despite the miserable living conditions, the Jews in the ghettos endured both spiritually and militarily. Underground civil groups organised aid (such as self-help, welfare, orphanages, “people’s kitchens", rescues) as well as spiritual resistance (through schools and cultural, communal and religious activities). Jewish political parties organised armed resistance to Nazi oppression: in over 100 ghettos, Jews actively rose up against their oppressors.

The German administration divided food among the ghettos. Access to groceries varied. In October 1940, the official ratio for the Warsaw ghetto’s inhabitants was roughly 200 calories per day, sometimes less. Nobody would have survived had it not been for smuggling and it was often children who were involved in smuggling by using various holes and openings along the ghetto’s perimeter.

Approximately 80 per cent of what the people in ghettos ate was smuggled in each day. The official German allocation for non-Jewish Poles was roughly 700 calories, whereas Germans in Poland were allocated a ratio of 2 600 calories per day.

Read the text about the establishment of—and conditions in—the ghettos. Then choose two of the links below and listen to the testimonies of survivors describing life in the ghetto.

Look at the map below, click on the markers of different ghettos and read the quotes.

3.2 Life Changes for the Jews in Germany

Lindenthal, Jacob Jay. (2014). The Epidemiological Status and Health Care Administration of the Jews Before and During the Holocaust. In Michael A. Grodin (Editor). Jewish Medical Resistance in the Holocaust. New York: Berghahn Books.

View source | Conditions in the Ghettos: facts on calories

Lindenthal, Jacob Jay. (2014). The Epidemiological Status and Health Care Administration of the Jews Before and During the Holocaust. In Michael A. Grodin (Editor). Jewish Medical Resistance in the Holocaust. New York: Berghahn Books, p. 21.