This exercise contains examples of people who disagreed with or even resisted the Nazi regime. By doing these exercises, you will be able to develop your understanding of empathy and the importance of making decisions and acting upon them, necessary qualities in protecting and upholding democratic values and human rights.

Read the fact sheet and do the exercises that follow.

The White Rose – Resistance in Germany

Not everyone was a supporter of the ideas propagated by Hitler, and not everyone agreed with Nazi ideology, not even in Germany. There were some who rebelled in silence and there were those who through different means put up some kind of resistance. One such a group was the White Rose organisation, which operated in Munich between 1942 and 1943. 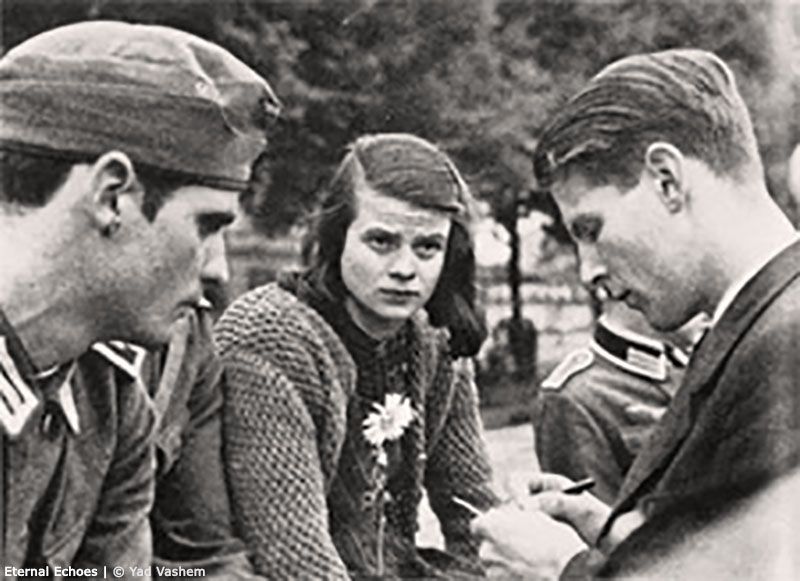 Hans Scholl, Sophie Scholl and Cristoph Probst who were all members of The White Rose organisation.

The members of the White Rose were young university students, among them a brother and sister: Hans and Sophie Scholl. The other members of the organization (Christoph Probst, Willi Graf, Alexander Schmorell) had, as medical students, served as medics in the army and been on the front.

While in the army, they had witnessed firsthand the horrors committed by the Nazis against Jewish civilians and forced labourers. They had also recognised that Germany would not be able to win the war; that Hitler and his system were condemning the German youth to death as well. In addition, they found out that the Nazis were methodically killing disabled children. All this made these young people act to print six leaflets and spread them throughout German universities and cities.

At the university, some of these young people attended the lectures of philosophy professor Kurt Huber who occasionally included veiled criticism of the Nazi government in his lectures. They made contact with Huber about the movement, and he participated in the fifth and sixth White Rose leaflets.

When they were finally discovered, the Scholl siblings and Probst were sentenced to death by guillotine in February 1943, while some were executed later on (Schmorell and Huber in July and Graf in October the same year). They did not waver under interrogation or during their sentencing but gallantly stood by their ideas. Their last leaflet, having been smuggled over to Great Britain, was propagated by the BBC and airdropped by Britain's Royal Air Force over German territory.

Read the following excerpts of leaflets from the White Rose, then answer the questions.

We will not keep silent. We are your guilty conscience. The White Rose will not leave you alone!

The last part of the fourth leaflet of the White Rose

Call to all Germans!

The war is approaching its destined end. ( . . . ) Hitler is leading the German nation to disaster. Hitler cannot win the war, he can only prolong it! His guilt and the guilt of his assistants have infinitely exceeded all measure. A just punishment grows ever closer!

And what is the German nation doing? It sees nothing, it hears nothing. It is blindly following its seducers to destruction. Victory at any price, that is what they have written on their flags. I will fight to the last man, says Hitler, but yet the war is already lost.

Germans! Do you and your children wish to suffer the same fate as the Jews? Do you wish to be measured with the same measure as your seducers? Shall we forever be the most hated and rejected nation in all the world? No! Therefore, separate yourselves from the National Socialist subhumanity! Prove with your deeds that you think differently! A new War of Independence is beginning. The better part of the nation is fighting with us. Rend the cloak of apathy that you have wrapped around your hearts! Make up your minds, before it is too late!

The greater part of the fifth leaflet of the White Rose

List of Sources to the Texts of the Leaflets