Introduction to other persecuted groups

During the Nazi regime citizens were divided into “we”, belonging to “the German community” and “others”, who for different reasons were considered “inferior” and therefore could not or were not allowed to be part of this community. These “others” were to be neutralized or removed from society, as they constituted problems, obstacles or enemies on the way to a perfect “German community.”

Political decisions, new laws and changes of existing laws pointed out different categories of people as “inferior.” The authorities interfered with these individual’s private lives, for instance through controlling their “race related” background and characteristics.

The individuals who were considered to belong to these groups ran great risk of persecution. They could become subjects of forced sterilization or be locked away in prisons, psychiatric clinics or concentration camps. They were to be suppressed or in different ways made to disappear from The Third Reich.

During the war there were plans to colonize occupied territories and replace “inferior race groups” as well as other “inferior” groups of people
with “full-fledged” Germans and their “race relatives”.
“Inferior” individuals could belong to more than one group, i.e you could be a homosexual man and a Jew or a political dissenter and as well as a Jew.

Read more about this in the article The Holocaust.

The first to be attacked after the Nazi seizure of power were political dissenters and Jews. At the beginning the attacks were mainly directed at members of socialist and communist organizations and parties, but union members, liberals, monarchists, and religious groups were also persecuted. From the end of March 1933 many were deported to Dachau, the first concentration camp designated for political dissenters. Those individuals who were of the “proper race” (“Aryan”) were seen as retrainable and many of them later regained their freedom, after having officially changed their opinion.

The German woman Orli Wald was one of those persecuted for her political views. Orli was a member of YCLG, Young German communists. She was apprehended in 1936 and put in prison, accused of, among other things, spreading political information. Orli was imprisoned until 1939 when she was transferred to the concentration camp Ravensbrück and three years later to Auschwitz-Birkenau. Orli Wald survived the Second World War and died in 1962 in a psychiatric clinic. 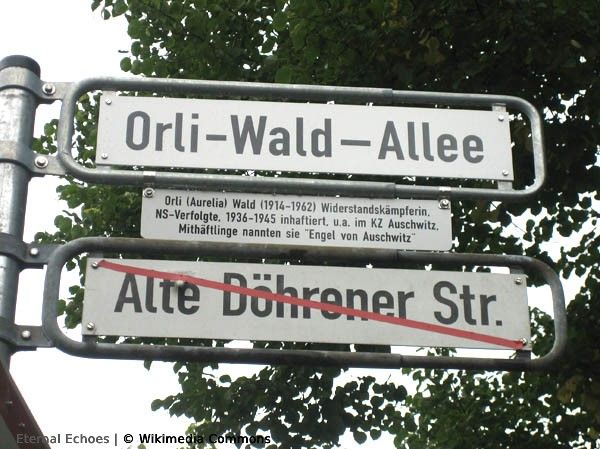 Persons with physical and mental handicaps

“The law regarding prevention of hereditary diseases” was enacted on July 14th, 1933.

According to the law anyone with a diagnosis of physical and/or mental disabilities, for example grave deformities, schizophrenia, manic depression, hereditary epilepsy or severe alcoholism was considered “a disease” and was subjected to forced sterilisation. Both mental disabilities and severe alcoholism were “loopholes” enabling the doctors who performed the medical procedure to also sterilise individuals who were considered “anti-social.” This could be persons who did not fit in socially due to poverty, unemployment or homelessness. The definition was very wide.

Read more about this in the exercise Racial Hygiene. 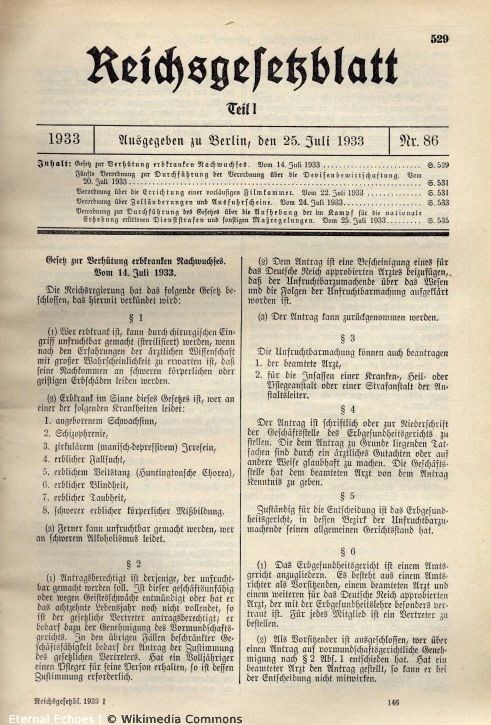 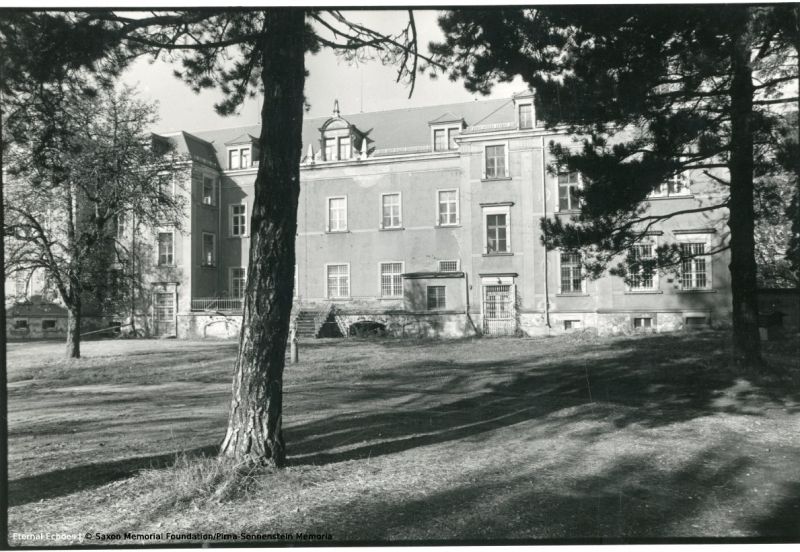 In the fall of 1939 the Nazis started “mercy killing” of children and adults with physical disabilities or mental illnesses. The killing was carried out in different places in Germany and Austria, including six large, so called Institutions of Euthanasia.

In 1941 Walter Lauer was gassed to death in one of these institutions, Pirna-Sonnenstein in Saxony. He was 19 years old and had suffered epileptic seizures since the age of seven. In April of 1940 Walter wrote a letter to his parents but the letter was stopped by staff.

"Dear mother, (…) don’t worry, I will not do anything silly. (…) When the war is over the secret of this place will be revealed and then maybe some will understand"

Already 1933 Jehovah’s Witnesses were forbidden to print their religious texts and to preach. When members refused to report to military service and swear The Oath of Allegiance to Adolf Hitler because of their religious faith they were seen as traitors and became subjects of persecution. From 1935 Jehovah’s Witnesses’ activities were completely forbidden in The Third Reich. From then on they were being sent to concentration camps.

Two weeks after the outbreak of the Second World War the first execution of a member of Jehovah’s Witnesses took place. The victim was 29-year-old August Dickman, a prisoner of Sachsenhausen. The death sentence had been announced as he refused to do military service. 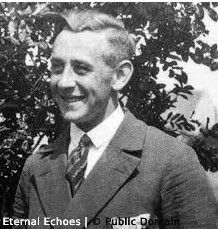 August Dickmann before the war 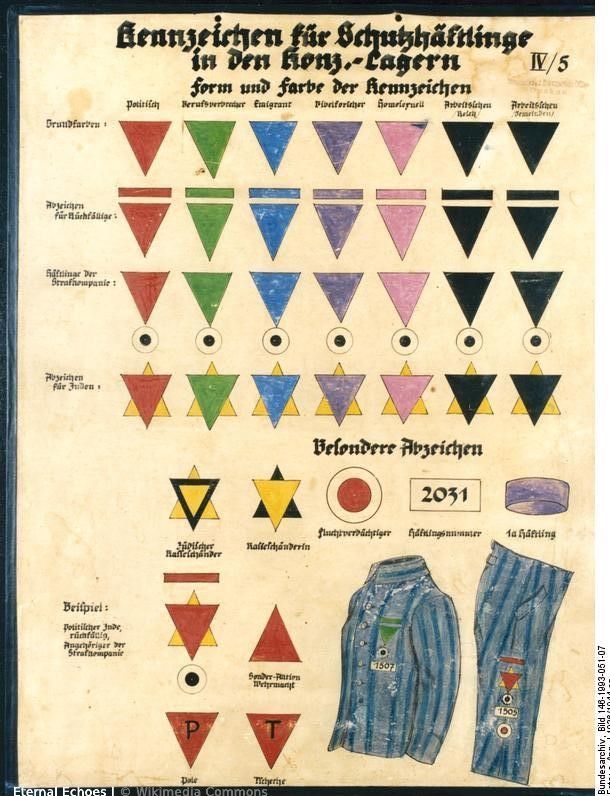 Poster showing the various badges marking the prisoners in the concentration camps.

In the camps, Jehovah’s Witnesses were marked by a purple triangle and they were spread out in different barracks to prevent them from holding religious meetings. Jehovah’s Witnesses was the only group of prisoners who could have avoided prison. It would have been enough to sign a document where they renounced their religion and any further “subversive activity”. Very few prisoners signed such a document.

Female prisoners with purple triangles in Auschwitz were often called “Bible bees” or “Bible worms” by SS guards. These prisoners worked as cleaners, maids and chefs in the homes of SS officers, in the offices of the camp and in stores for SS and their families.

Camp leadership knew that this group of prisoners would not try to escape. Not even when the Germans started moving prisoners from the camp in January 1945 did the Jehovah’s Witnesses revolt against their oppressors.

Sexual relations between German Jews and non-Jews were considered “racial disgrace” (Rassenschande). The law forbade such relationships in September 1935, but many individuals had been persecuted already before the law took effect.

In August 1935, Juda Rosenberg and Elisabeth Makowiak, who lived in the German town of Gelsenkirschen, were hunted by members of SS and SA. They were forced to wear signs around the neck with names, addresses and words of abuse. Juda had to wear a hat with the words “Racial disgrace”. The text also read “I disgrace my own race”. On Elisabeth’s sign was written “I am a blond angel who slept with this Jewish rat”.

In the Gelsenkirchen newspaper Nationalzeitung was printed the text “A Jewish scoundrel and a Jewish whore shamefully at the pillory” beneath a photo of them. The couple was punished as they had been seen taking a walk together and were reported. 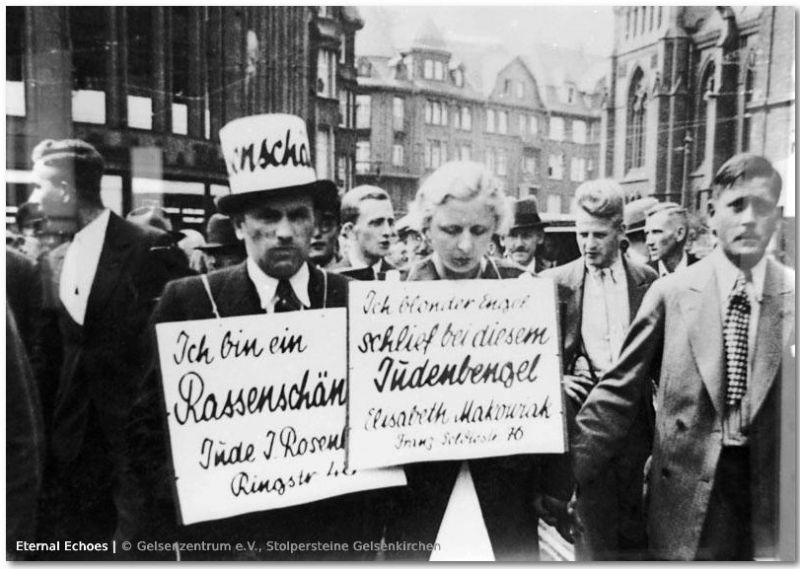 Juda Rosenberg and Elisabeth Makowiak with denigrating signs around their necks 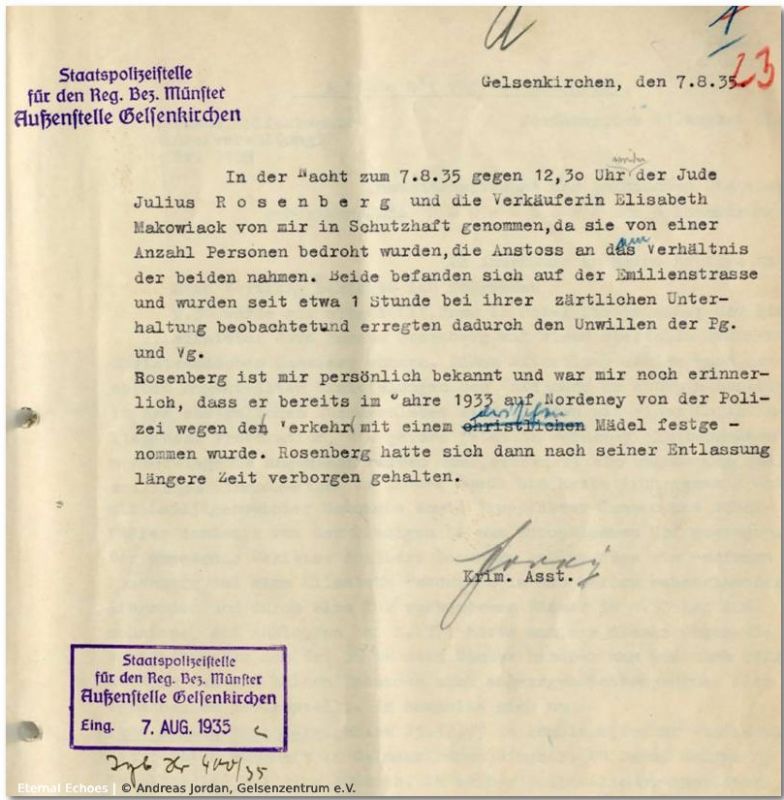 Document from Gestapo, the German security police, concerning the arrest of Juda Rosenberg and Elisabeth Makowiak.

Juda was imprisoned and died in the concentration camp Sachsenhausen in 1940. Elisabeth was apprehended as she had committed the crime of racial disgrace but was later released.

The suffering of Elisabeth and Juda was commemorated in 2013 and 2017 with memorial stones. 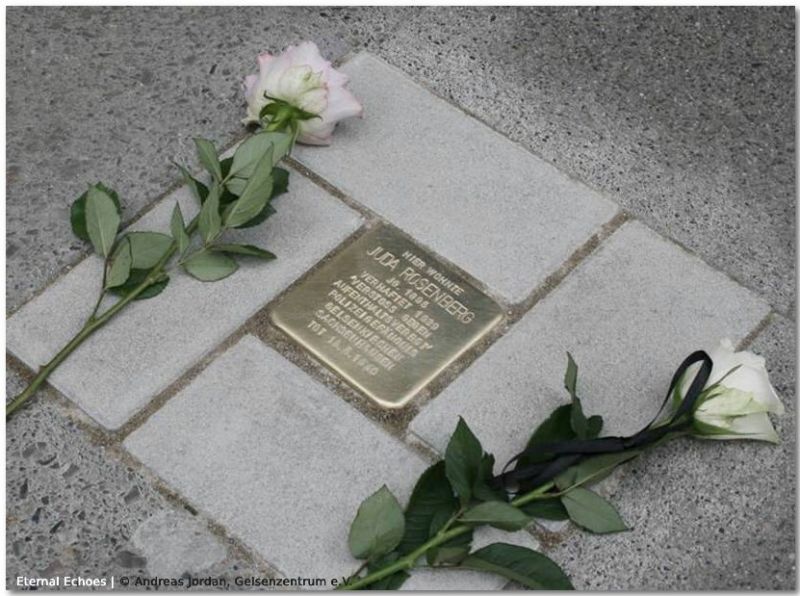 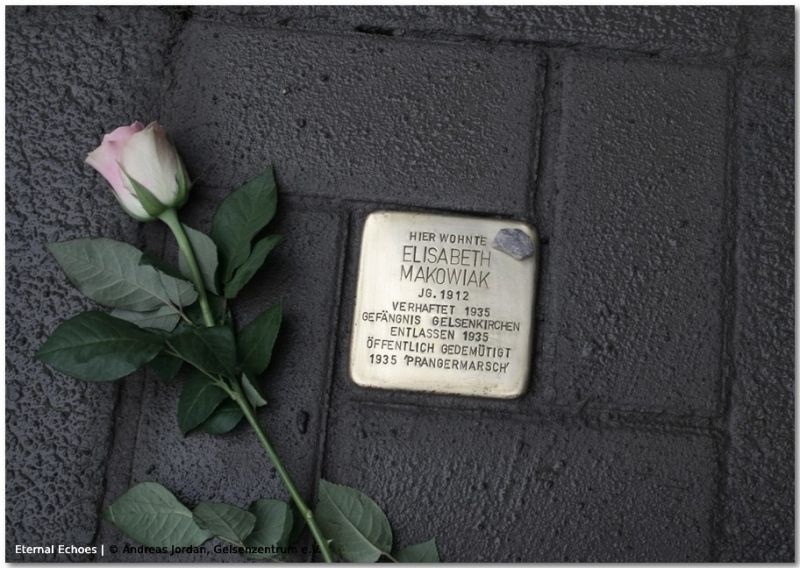 Memorial stones in Gelsenkirschen, so called Stolpersteine (“stumbling stones”), remembering persons who were expelled or murdered during the Holocaust. The stones are placed in the sidewalk outside a house where the person lived

During the persecution of homosexual men, the Nazis used paragraph 175, an old law from 1871 which they strengthened. In 1933, victims of this paragraph were put in prison to work, with the intention of readjustment to society. Many were also castrated or sterilized. Two years later, in 1935, this law was extended to greatly increase punishment for homosexual relationships between men.

The mere suspicion of a sexual relationship such as a letter, a photograph or an indication by someone was enough, which lead to many sentences even of heterosexual men. Lesbian women and transgender persons were not included in this law but were nevertheless persecuted. Many individuals in these groups were classified as “anti-social” and were imprisoned or deported to concentration camps. Men who were suspected of being homosexual could also be sent to concentration camps, where they would be marked by a pink triangle.

Among them was the lock smith Walter Degan, born 1909. In 1940 he was incarcerated the first time under paragraph 175. One year later he was deported to Auschwitz where his registration number was 20285. By the end of the war he had also been imprisoned in the camps Mauthausen, Dachau and Sachsenhausen. 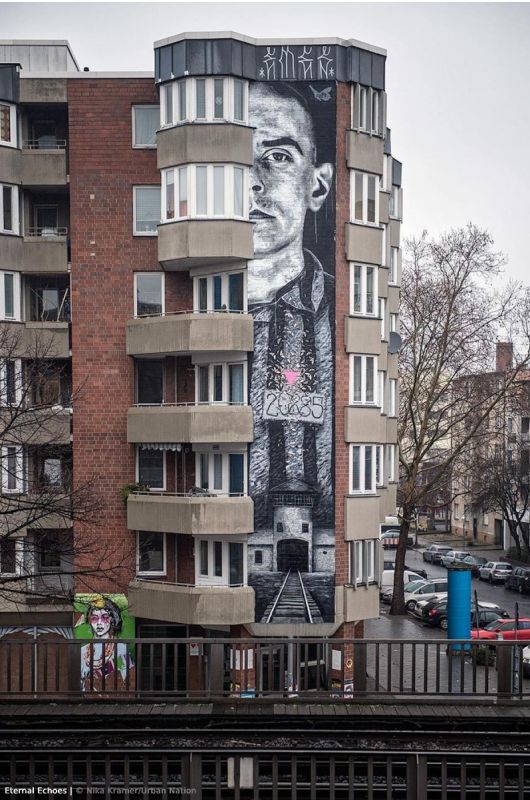 Yet another of the victimized groups of the Third Reich was the citizens of Nazi occupied areas, as they were considered “inferior”. During the occupation of Poland the civilian population were exposed to far-reaching persecution and murder. The plan for Poland was that Poles (and Jews) who lived in areas annexed by the Third Reich would be transferred to the so-called General Government.

Annexed Polish lands would then be colonised by Germans. In addition, millions of civilians in the occupied territories were exploited as forced labour in farming, industry and weapons factories. It was not until the end of the 1980s that these groups were formally recognized as victims of Nazi Germany.

During  the so called AB-action (Ausserordentliche Befriedungsaktion –Extraordinary Operation of Pacification), performed between May and June 1940, prominent Polish citizens were arrested and murdered. Political activity against the occupying power could mean punishment by death or that the person was sent to a concentration camp.

The civilian population was held collectively responsible for actions of resistance against the Nazi regime. From July 1941, at which point the war between Germany and the Soviet Union began, also Soviet citizens and Soviet prisoners of war became victims.

According to Hitler’s policies, the political officers of the Red Army were to be executed immediately. Many of the detainees were interned in camps for prisoners of war under very difficult conditions. The hygiene was poor, the forced labour was hard and many starved to death. Calculations indicate that approximately three million Soviet prisoners of war died during the Second World War.