Klara Tixell and her family were eventually liberated in 1945. At liberation, they were brought by the so-called white busses to Sweden.

Klara was 15 years old when she left Sweden and returned to Denmark. She experiences many difficulties in finding a way to lead a "normal life".

Klara talks about the liberation

1) Listen to Klara as she talks about the liberation. Read the Red Cross report on the event. Then answer the questions. 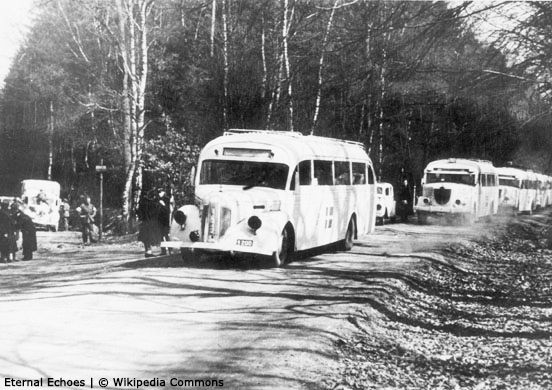 The plan was to leave the Frenchmen in Flossenburg but when they got there it turned out that the situation in the camp was too chaotic. Therefore it was decided that the French should be brought to Theresienstadt, where they were subsequently picked up and taken to Switzerland.

The Danish physician John Holm and Obersturmbahnführer dr. Rennau put a lot of effort into arranging the transports to Theresienstadt. Dr. Rennau explained that although Himmler had given permission to the retrieval of the Danish Jews, there was a massive resistance among the subordinates. The head of the security service, Kaltenbrunner, strongly opposed to the transport and didn't really want to allow the retrieval of the Scandinavian Jews. In the end, however, he authorized to bring them out of the camp. The column with its 423 passengers reached Lübeck on the 16th of April. From there they were taken to Malmö, where they arrived two days later. In fact, they were all Danish Jews. The majority of the Norwegian Jews had been murdered or died shortly after the deportation to the camp. Only a few of them were still alive.”

”According to our calculations the Bernadotte expedition rescued about 15 000 people from the concentration camps, including the last inmates that were transferred out of Germany. Just about fifty percent of these, around 7 800, were the Scandinavians.”

The Beginning of a New Life

Klara talks about what it was like for her to try to adapt to a "normal life".

2)  Listen to Klara as she talks about "the beginning of a new life". Answer the questions.

The End of War and Liberation

A slideshow about the end of war, liberation and aftermath.

Historical Context Section 1: The History of the Danish Jews

Historical Context Section 3: Demark in the 1930s and During the German Occupation

Historical Context Section 5: The End of War and Liberation