Tobias and his mother moved to Kaunas ghetto in the middle of July, 1941. They survived the great action which took place in October 28, 1941 when about 9 thousand people were murdered. In the ghetto Tobias learned to work with metal, played with the friends, kept rabbits, looked after vegetables, worked as the police messenger. Tobias tells us about the life in the ghetto after 50 years. He understands that it was the mother who realized much better the tragedy of their situation in comparison to him, 11 year old boy. Mother took care not only of the food, clothing and safety. She sent her son to go through bar mitzvah when he turned 13.

CONSIDER THE STORY OF TOBIAS IN THE KAUNAS GHETTO

Life in the Ghetto

Tobias and his mother lived in the ghetto 1941–1944. They survived all actions when people were selected for murder. There was a shortage of food. Tobias worked. It was his mother who took care of food and clothing. On her initiative, Tobias went through Bar Mitzva in order to become the full member of the Jewish Community.

1) Listen to Tobias as he talks about life in the Kaunas ghetto. Answer the questions.

After Tobias’ mother took care of the son’s safety, she took a risk to save her own life and leave the ghetto. Tobias learned about his mother’s death from the survivors’ stories of which he himself was not sure. On July 1, 1944, his mother tried to bribe the ghetto gate guard who shot her. The mother’s grave didn’t survive.

2) Listen to Tobias as he talks about the death of his mother. Answer the questions. 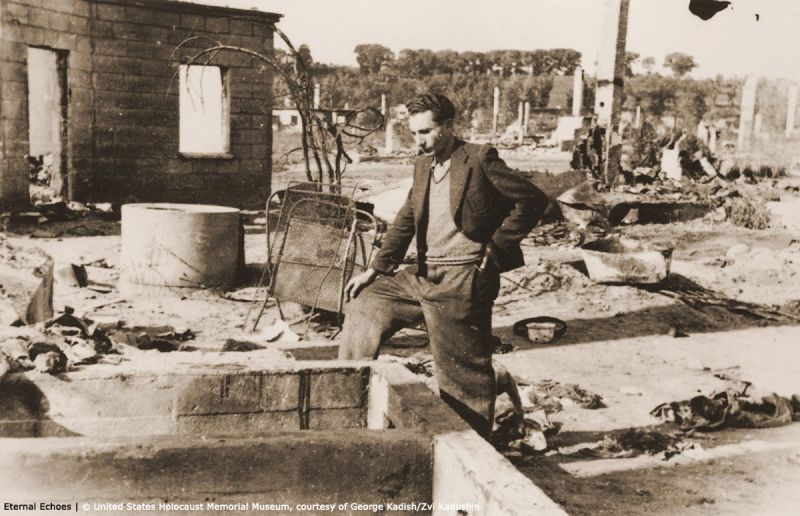 Survivor views the burned out remains of the Kaunas ghetto.

On June 24, 1941, the German army entered Kaunas. On June 23, 1941, the control of Kaunas took the Lithuanian anti-Soviet fighters, the Lithuanian Activist Front. They proclaimed Lithuanian independence, founded the Provisional Government, restored the Lithuanian rule of the country and started arrests of the Jews. Many Lithuanians watched the withdrawal of the Soviet forces with relief and welcomed the Germans. And indeed for a few short days, Lithuanians believed they were free once more. The national flag flew from buildings, local administrators returned to work. The leaders of the uprising sought Nazi recognition but the latter would not enter into talks with the Provisional Government as an equal partner. On June 25 Kaunas was fully in the hands of the Germans.

In June there were anti-Jewish pogroms in Kaunas initiated by the Germans and carried out by the Lithuanians paramilitary forces. Cruel murder took place in the central streets of Kaunas and Vilijampole suburb where later the Nazis established the ghetto. Mass shootings of the Jews started in July in Kaunas VII and IV forts. About 8 thousand Jews were killed before the opening of the ghetto.

On July 17 Estonian, Latvian, Lithuanian and part of Belarus territory was turned into an Ostland Commissariat. Lithuania became a general region of Ostland with its centre in Kaunas.

On July 10 following the German orders, Kaunas municipality issued the order to establish the ghetto in Vilijampole suburb from July 15 to August 15. On July 12 the orders were made for the Jews to wear the yellow Star of David; a curfew and many other restrictions were introduced.

The German army advanced to the USSR territories. Special Police divisions followed it. Operative groups (Einsatzgruppen) comprising operational units (Einsatzkommando) organised, controlled and implemented the destruction of Reich enemies (Red Army soldiers, Jews, Roma people, Communists) behind the front lines. By 1942 around 80 per cent of Lithuanian Jews had been killed. The remaining population was closed in the ghettos. The Kaunas ghetto was established on August 15 when the territory was surrounded by the barbed wire. The German and Lithuanian police guarded the ghetto.

Before the war in Vilijampole there lived about 12 000 people. In the ghetto, there were about 30 000. Before the ghetto, the Vilijampole suburb was extremely poor – without sewers and running water, disinfection offices, bathhouses and medical centres. The ghetto was in dire danger of contagious diseases and epidemics. Following the German order, the internal affairs of the ghetto were in the hands of the Judenrat. Kaunas Judenrat had the following departments: Labour, Economics, Health Care, Social Aid, Food, Jewish Police, Court and Statistics Bureau. Jewish Police and firefighters brigade were under subordination of Judenrat, too. Dr Elchanan Elkes was elected the head of Judenrat. The Germans imposed the food norms to the Jewish prisoners. In a week a Jew would receive 700 gr. of bread, 125 gr. of flour, 125 gr. of meat, coffee or tea substitutes.

Ghetto prisoners had to do forced labour. The largest and main workplace that demanded the largest amount of human power was Aleksotas airfield. This was the hardest workplace. People had to walk 16 km to and back from the airfield had to load carriages, dig and carry the earth, people worked in shifts day and night.

On October 25 the Judenrat received the German order to collect all ghetto residents in the central square on October 28. That day the SS men carried out the selection. People approached the SS man in families and were sent either to left or right. One side meant life, the other – death. The condemned – about 9 200 people – were sent to the small ghetto and from there to the 9 Fort and shot. This is the largest amount of murdered people in one place at one time in Lithuanian history. After the great action in the ghetto, only 17 000 people were left.

After the great action, there was a period of stabilisation. There were no mass killings until March 26–27, 1944 when 1 700 children and few adults were arrested and murdered in the 9 Fort. In 1944 Judenrat and ghetto Police ceased existing.

Jews interned in the ghetto did not surrender to the Nazis deliberately or impulsively. Resistance took on the most varied forms, from non-compliance with the dehumanising Nazi policies through culture, religion and traditions, to armed combat. Some of the Jews, especially young ones, joined underground anti-Nazi organization seeking to resist with armed force. Despite huge risks and heavy losses Kaunas anti-Nazi fighters organized escape to the Soviet partisans in Belarus. Weapons had to be obtained and brought into the ghetto, and then the fighters had to reach the partisans. This was very risky and cost many lives. About 1 500 fighters managed to reach the forests and join the partisans. Head of Kaunas ghetto Police, Moshe Levin and several of his men belonged to the anti-Nazi underground. The Nazis learned about that and arrested Levin and 130 policemen. All were tortured and killed.

When the Kaunas ghetto was liquidated almost only ruins were left behind. The remaining Jews were transported to Stutthof, Dachau and other concentration camps. The Nazis blew up houses before retreating knowing that Jews were hiding in hideouts beneath the buildings. Around 1 000 people burned alive in the ruins. The history of Kaunas ghetto ended in July 1944. Only a few hundred Kaunas Jews survived the war.

3) Read the historical text about the Nazi German occupation of Kaunas and the ghetto. Then answer the questions.