Tobias Iafetas was born in 1930 in Rafael and Berta Iafetas family, Kaunas. His father was a Lithuanian representative of the British textile company and supported the family. Tobias’ mother was a house wife. Tobias was the youngest son in the family. His older brothers were Azriel (b. 1925) and Fima (1926–1933).

There were several languages used in Tobias family. Mother and father spoke Russian among themselves. Tobias spoke German, Hebrew and a little bit of Lithuanian.

CONSIDER THE STORY OF TOBIAS’ CHILDHOOD IN KAUNAS

Tobias Iafetas was born and grew up in Kaunas. He was the third and youngest son in the family. The mother longed for a girl. That is why until 3 years Tobias was dressed like a girl. Azriel and Fima were the older brothers of Tobias. In 1933 Fima died and was buried in Kaunas Jewish cemetery.

1) Listen to Tobias as he talks about his family and look through the photographs. Answer the questions.

2) Listen to Tobias as he talks about the school. Answer the questions. 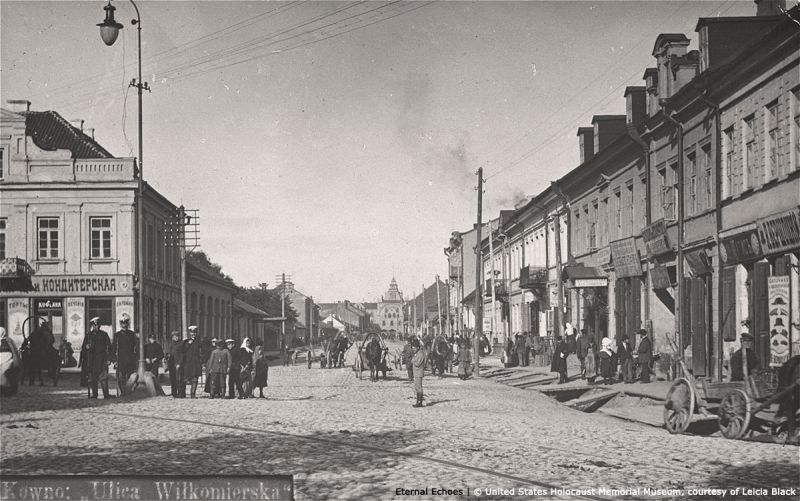 The first mention of the Jews in Kaunas is found in the documents of the XV century. The manuscript mentions individual Jews in Kaunas who collected taxes of customs. In the 17 c, there already was a Jewish community in Kaunas. The Jewish population grew constantly. In 1765 there were 969 Jewish residents. In 1864 the number grew to 16 514. In 1933 it was 38 000 which made 33,5 per cent of the total population.

Three important aspects of Jewish life were: personal life in the family; social life in the community and economic life which, as commerce dictated, took place outside the family and community. The first two were very much influenced by the Jewish religious tradition and community rule. The social life of community rotated largely around the synagogue where people prayed, men studied religious texts, community meetings and court session were held. Near the synagogue, there was a school, rabbi’s house and Mikvah. Jews spoke in Yiddish. Language, religious and cultural conservativism, forms of commerce of the Jewish community restricted its contacts with the Christian society of Kaunas. On the other hand, Jews hold commercial contacts with Gentiles in both, towns and villages. Unlike in cities of Germany, Poland or Russia where Jews interacted with Gentiles through economic and cultural ties and assimilated, this process did not take place in Kaunas.

In the 20th century, Jewish life in the town and region gradually changed. After World War I and after Lithuania lost Vilnius, Kaunas became capital of Lithuania. 60 names of Jewish soldiers who died in the battles for Lithuanian Independence were inscribed on a memorial plaque in Kaunas Choir synagogue. Kaunas Jewish community was not monolithic. It was home to heated discussions between left-wing socialists, liberal democrats and right-wing conservatives, between folks Yidishists and Zionist Hebrews. In public life, three political persuasions were most active: Zionists, democratic Yiddish groups and religious Jews. The Zionists were the largest and most influential group. According to the figures of 1923 Kaunas was 59 per cent Lithuanian and 27 per cent Jewish. Kaunas Jews were very active in local council elections. Until 1931 Jews would win more votes in local elections and together with the Poles always formed an absolute majority.

The function of a new national educational system was a special significance in the history of Kaunas and Lithuanian Jewry. Jews in Lithuania had state-recognized and partly state-financed schools. In Kaunas there were three types of schools: secular Zionist Tarbut with teaching in Hebrew; religious Yavne with teaching in Hebrew and secular schools where subjects were taught in Yiddish. Vytautas Magnus University in Kaunas opened the Department of Semitic studies.

Although the law had not restricted Jewish political, cultural and economic life in Lithuania, unwritten rules had been in effect within society. Traditionally Jews had lesser opportunities to take part in Government, military and other state institutions. At the end of 1926 as Lithuania deviated from the path of democratic development antisemitism increased and became more organized. Still, no Lithuanian Government was openly antisemitic and no discriminatory legislation was passed. Though the years before WWII witnessed to antisemitic manifestations. The theme of unacceptable Jewish predominance in trade was brought up, urging to rid Lithuanians of “Jewish exploitation”. The slogan “Lithuania for Lithuanians” became a rallying cry. Luckily neither President Smetona nor the leader of the Young Nationalist Movement Voldemaras was antisemitic. This did much to ensure that antisemitism was not allowed to develop in Lithuania.

3) Read the historical text about Jewish life in the town of Kaunas. Answer the questions.