After the war Tobias lived with Katinskai family. His aunt Maria Katinskiene loved him as her own son. Tobias spoke German, Russian, Lithuanian and Yiddish languages. After the war he put lots of efforts to learn Lithuanian. Tobias graduated the secondary school, Pedagogical Institute and worked at the computer factory.

When Lithuania got its independence Tobias became very active member of the Lithuanian Jewish Community. Till the death Tobias was the Head of the Ghetto and Concentration Camp Prisoners Union.

CONSIDER TOBIAS LIFE AFTER THE WAR

Tobias longed for education. He graduated the secondary school and got University diploma. He learned the Lithuanian language.

1) Listen to Tobias as he talks about his studies at school. Answer the questions.

Tobias worked at the computer factory for 32 years. Only in 1955, Tobias learned about his father and brother Azriel living in England. In 1957 Tobias father came to the USSR and met with Tobias.

2) Listen to Tobias as he talks about his education and work. Answer the questions.

Words to Next Generation

"I wish the future generation doesn’t go through the tragedies I went through. Don’t interfere with the lives of others. Every human is very precious and unique." 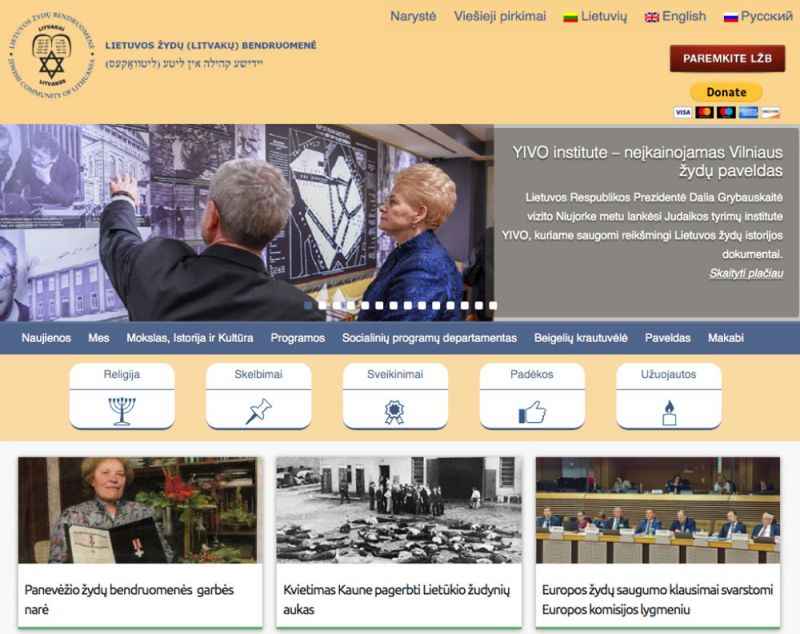 A very small number of Lithuanian Jews survived the Nazi occupation. Jews who managed to flee or were evacuated into the Soviet Union during the first days of the war or who survived the Nazi camps returned home. Others survived the war in hiding or served with the Soviet partisan units or the Soviet Army. Some of those who survived the war did not return home but immigrated to Palestine, the USA, Canada, Western Europe or other countries. After the war Jews of other republics of the Soviet Union complemented the number of Jews in Lithuania. In Lithuania Jews set out to rebuild Jewish life. One of their first concerns was to honour the memory of the Nazi victims. It was important to mark the slaughter sites with monuments. In Vilnius and Kaunas religious communities began to operate under the leadership of two surviving rabbis. A Jewish museum was opened in Vilnius in 1944. Attempts were made to find the rescued Jewish children and look for new families for them. Children homes were opened in Vilnius and Kaunas. In 1946 there were around 10 000 Jews in Lithuania.

The Soviet Union’s antisemitic policy brought lots of damage to the lives of Jews in Lithuania. Printing books and periodicals in Yiddish was not allowed. The liquidation of the cultural institutions began. By 1950 the Jewish museum, schools in Vilnius and Kaunas were closed. The two Jewish cemeteries in Vilnius were desecrated. The monument to the Holocaust victims in Paneriai with its Yiddish inscriptions was demolished. In 1951 streets in Vilnius and Kaunas associated with the Jewish history and its figures were renamed. Sensing the uncertainty of their fate and often unfavourable state policy, Jews began to seek chances to emigrate.

The thaw that accompanied Stalin’s death in 1953 gave Jews better chances to express themselves professionally and culturally. In 1959 there were approx. 24 600 Jews in Lithuania. Jews became known for their talents and achievements – the writer Grigory Kanovich, the composer Benjamin Gorbulsky, the founder and leader of the children’s choir “Azuoliukas” Herman Perelstein and others. However, this did not put the end to the emigration because Jews did not feel safe or at home in Lithuania. At the end of the 1980s there were 12,300 Jews in Lithuania.

Because of the Holocaust, post-war emigration, immigration of Jews from other parts of the Soviet Union and Soviet policy the Jews were not present in Lithuania as an organized community. At the end of the 1980s the rise of Jewish cultural life in Lithuania was connected to the Lithuanian Rebirth Movement. In 1987 a founding group of supporters of Lithuanian Jewish Culture was created. Later it developed into the Lithuanian Jewish Cultural Association that finally turned into the Lithuanian Jewish Community. In Lithuania a Jewish radio program was broadcasted, a Judaica section was founded at the National Library, the Jewish kindergarten and school opened the doors. The newspaper “Lithuanian Jerusalem” came out. The Jewish Museum was re-opened. Other developments included the restoration of the Jewish names to the streets of Kaunas and Vilnius, Jewish cemeteries and execution sites were cared for throughout Lithuania.

3) Read the text about Jewish life in Soviet Lithuania after WWII. Then answer the question.